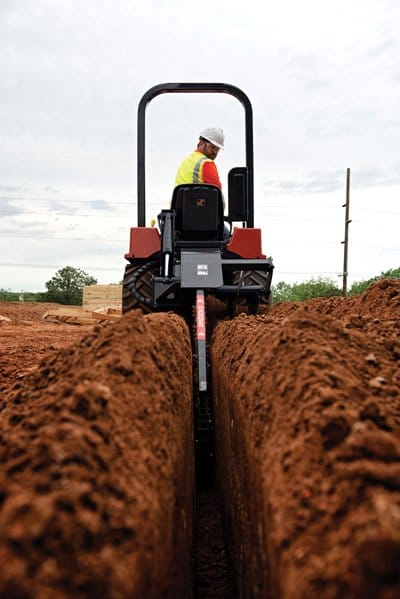 You might have to move the current utility lines under a residential or commercial building. Or maybe you need to run electric cabling and gas and water lines underneath your construction project. In either case, you should start by determining whether you need to trench or bore for it.

Horizontal boring and traditional trenching are among contractor’s most commonly used methods, but the right method for your job depends on several factors. These factors include the price range, layout, soil texture, and whether or not there are any obstacles in the way – an issue that arises most commonly when looking to replace utility lines.

Here are some differences between horizontal boring and traditional trenching to keep in mind when considering your options.

What Is Horizontal Boring?

Horizontal boring, more commonly referred to as directional boring, is a trenchless method of installing utility lines. In particular, it is used for electrical cables, pipes, or conduits being installed in a shallow arc along a prescribed path. Boring is done using a surface-launched cutting tool.

The process involves a single-point cutting tool known as a boring head that enlarges an existing hole that was previously drilled at a workplace. The functional length for most horizontal boring projects is 3,000 meters or a little under 2 miles.

Boring is much easier for places where there are obstacles, such as the concrete foundation, pavement, large rocks, or existing utility lines. Boring also has a much smaller footprint which means it is generally much more environmentally friendly.

Directional boring, though a complex and involved process, is generally considered to be a safer alternative to other methods. One major advantage of horizontal boring is that it virtually eliminates the risk of groundwater pollution, and offers protection for both water lines and electric cables.

One of the biggest issues with boring is the increased costs, particularly if there are many obstacles that you need to go through or around. Electrical wiring and ground utility contractors often analyze the ground first and then recommend actions accordingly.

What Is Traditional Trenching?

Traditional trenching is the process of digging the earth to expose utility lines, replacing or repairing them, and covering everything back up. These trenches can be of varying lengths and depths to make space for larger or smaller conduits.

The process may involve shovels and picks, and may include excavators with buckets or even drills. The typical depth of trenches is 5 feet – which is below the depth most utility lines are buried (1.5 to 2 feet for service lines and 3 to 4 feet for mains).

Trenching is one of the most cost-effective ways of installing utility lines, especially when compared to traditional boring in an open property. When boring, you need to dig a new hole for almost every line you need to install; but with trenching, the process becomes much simpler.

Trenching is a very painstaking task – and often takes much more time. Trenching can also become very costly if there is a concrete foundation or a large boulder in the way, which will require a crane or a new bit for an excavator. And finally, the weather can adversely affect trenching as well.

When it comes to the difference between trenching and boring, they both come with their own set of advantages and disadvantages. It ultimately comes down to the safest and most cost effective method for each worksite and job.

Americom has decades of experience safely, efficiently, and cost effectively preparing and laying utility lines. If you need help with trenching or drilling at your worksite, or you would like a consultation on what will work best for you, get in touch with us today!